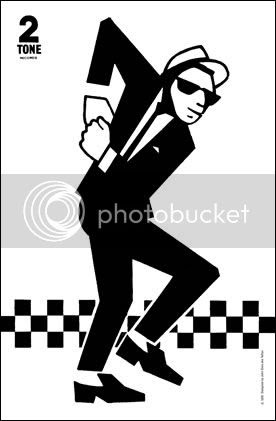 A man named David Storey was just one of a team who created the fantastic 2-Tone style. The hands-in-pockets version of “2-Tone Man” (also named Walt Jabsco, after a bowling shirt) was originally drawn by Jerry Dammers, keyboard player of The Specials.
John Teflon” Sims designed many of the most iconic 2-Tone graphics, under Jerry Dammers’ creative direction. Examples include the Walt Jabsco “Nutty Dancer” version and The Specials “Rat Race” single graphics (for which he won a D&AD Award in 1981).
Posted by GATECRASHER at 6:44 AM

2 Tone (or Two Tone) is a music genre created in the United Kingdom in the late 1970s by fusing elements of ska, punk rock, rocksteady, reggae, and New Wave. It was called 2 Tone because most of the bands were signed to 2 Tone Records at some point. Please find below my thoughts and favourites of this great time in music history. SB

ALL YOU NEED TO KNOW